"I pledge to uphold the Objects of Circle K International, to foster compassion and goodwill towards others through service and leadership, to develop my abilities and the abilities of all people, and to dedicate myself to the realization of humanity's potential." 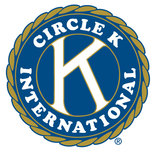 CKI began in 1936 as a ﻿﻿Kiwanis﻿ club service project to provide an opportunity for capable, ambitious, and worthy young men to acquire a college education by assisting them, where necessary, with their financial problems, by means of a scholarship fund, if available, or securing part-time employment. Soon after the concept of CKI was recognized and accepted, the element of community service was introduced, thu﻿s creating an appealing outlet for collegians around the globe.

Today, as the largest collegiate service organization, CKI boasts a membership of more than 13,700 collegians on more than 500 campuses in 17 countries worldwide. CKI is a s﻿tudent-led organization with an International Board of Representatives elected by its membership each year. Embodied by its tenets of leadership, fellowship, and service at the club, district and international levels, CKI continues to grow through service to the world's campuses and communities.